This weekend, Corey and I brought Chess Heroes to iFEST, an independent game expo at its annual stop in Seattle. We hit the road out of Eugene at 5 AM, cruised into Seattle (blasting Paul's Boutique) at about 9:15, and drove to the address specified by the Seattle Center.

When we arrived, the navigator voice stated our destination was on the left. We looked to the left. It was a demolished building. Uh oh!

After a laugh and few choice words for modern computational touchtronic navigational assistance, we figured it all out and were set up not thirty minutes later. 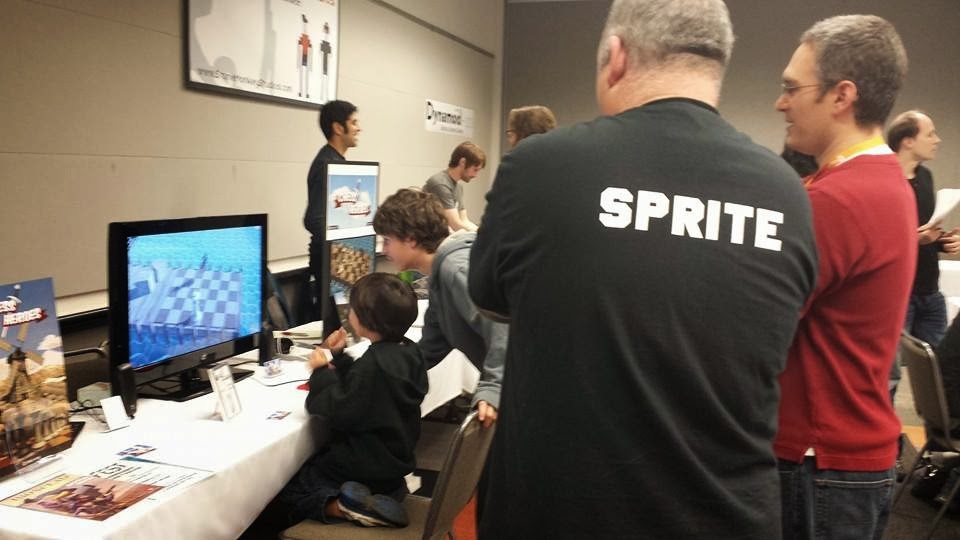 The folks running the show were great (thanks for the help, Terry!), and Chess Heroes won a bunch of new fans. There was one hair-pulling incident, involving a special chess piece that would disappear and break the game. And it only happened on the Windows version! Ah well. Something to ponder before the demo goes live!

Corey noted that the people who "got it" the most were kids and other game designers who were at the show. For kids, the accessible nature of the game was a big plus, and the animations really made an impact (especially the Rook shooting the Pawn!).

And then there were kids who really got into it, pushing their pieces around like tiny Caesars and jumping up in down in their chair as they captured pieces.

Meanwhile, game designers talked about their love of strategy games and the appeal of trying to inject something fresh into the game. Our line was "We're taking chess in a new direction, and we're trying to see if it leads to a cliff or a verdant forest." Or, as an A/B test, "We're taking chess in a new direction, and seeing how far we can go before we get pitchforked." Proper chess folks did not set our table on fire, thank goodness, so I think we escaped that sad fate.

Finally, there were the normal gamers who just got hooked and would not stop playing, even retrying certain scenarios over and over until they won.

At the end of the day, my beliefs about the game were reinforced.


I also heard  (from the fine folks at Zachtronics) that the name of the game might be a liability. It's chess, but not chess. There are no "heroes" with capes and swords. Sort of like how their game Spacechem was neither about a) Space or b) Chemistry, and that was not a good name for the (excellent, well-designed) game! Something to think about, surely.

Also from the Zachtronics camp was a suggestion to make a sequel in space. Little did she know... that was the plan!  =)  [but first, ship version one!]

Before I wrap up, I want to give a quick shout out to the lovely indie devs of Seattle I'm slowly getting to know, as I somehow end up there every other month or so:
Posted by Unknown at 5:34 PM