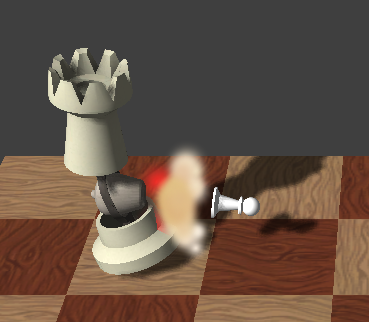 This is it! Chess Heroes has taken its first steps into the wild!

I compiled a list of 60 people whose opinion I trust and respect, and sent them links to the game today. This is a big step for me. It's sort of like the first time you leave your child at someone's house. If they get back in one piece and everybody's smiling when it's over, I'll call that a success. Until then, I'll be in a corner, gnawing on a frozen towel for comfort.

@Oreganik Wow, Chess Heroes is so similar to a dream game of mine that exists only on notebook paper. Looking awesome!
— Christer Kaitila (@McFunkypants) September 17, 2013

Christer "McFunkypants" Kaitila is a bad-ass indie developer who consistently crushes it with game jam entries, and hosts a few of his own, including #onegameamonth. (Which I totally signed up for then immediately bailed on, due to hurricane levels of WTF in my life) His support means a lot to me, and he sent back some excellent feedback that -- no joke -- deeply altered some of the core level design concepts of Chess Heroes.

I also got help this week from Jon and Jon (Jon Rush of Battlecry Studios and Jon Heiner of Realta Entertainment), who helped me solve a texture problem that was bugging me.

All I can say is, developing a game by yourself just means you get the biggest credit on the box. There's no way I'd ever be able to do this alone.

Posted by Unknown at 4:20 PM No comments:

Wither: A spell cast by the Scarecrow King.
Restricts movement to a single square.

The past week has seen the game transformed from a mostly-stable, silent, hands-on demo to a rock-solid downloadable demo that's alive with sound!
I wanted to be able to send the game to interested bloggers (like the fine folks at Geekenstein) without a full page of stuff "that should be there." I also entered the indie game competition at the Captivate Conference. The game must represent itself well, without me holding its hand, and I think I'm getting pretty close.

After a thorough round of testing, I'll be posting it live to the internet.

What is Chess Heroes about?
You are a chess King who's pieces have mysteriously disappeared, just as your kingdom is invaded! You must take back your pieces and rebuild your army, then travel abroad to learn new skills and ancient spells that will help you overcome a sinister foe.

What is a Tactical Puzzle game?
You fight the enemy in a variety of scenarios that are short and fun. The board can be any size, and there are no rules on the number of pieces on the board. This means you'll encounter a new challenge each time you play! The tactical puzzles are designed to reward skill and experience, while new players will get a sense of accomplishment as they "unlock" the secret of the puzzle after a handful of tries.


How is it like chess?
Each chess piece moves like it should, so players with only a passing experience of the game will be right at home. And the King earns new pieces one at a time, giving totally new players a chance to learn how to play, by playing!


How is it different than chess?
In Act 2 and Act 3, players will earn Special Abilities and Battle Magic, which put incredible power in players' hands. They'll need it as they face down bigger and bigger groups of enemies, and to beat the unique bosses at each location!


What are Special Abilities?
Special Abilities alter the player's view of the battlefield by turning Pawns into a resource. For example, the King can sacrifice a nearby Pawn to move as a Queen for one turn, while the Rook can launch a Pawn across the board to capture an enemy piece, destroying the Pawn in the process! Each piece has their own Special Ability, and as the campaign to take back the kingdom goes on, Pawns will become more and more valuable!


What is Battle Magic?
Every time a piece is captured, magical energy is released onto the battlefield. The player can use this energy to accomplish wondrous feats, like moving a piece twice, upgrading a Pawn, freezing an enemy piece, and more!

How long will it take to play?
The demo features twelve scenarios across three locations, and it takes most people about 40 minutes to an hour. The final game will have eighteen locations across three acts, as well bonus challenge levels! I'm also considering a scenario editor, cosmetic unlocks, achievements, and other stuff that's fun to play around with.

When is Chess Heroes coming out, and what platforms are supported?
Chess Heroes will be released in three acts on PC, Mac, and Linux platforms, starting in the Fall of 2013. (I'm aiming for early November) Those who buy earlier acts will get the later acts for free, which is a bargain, since the price will go up each time! It will start at $6, go to $8, then stop at $10.

Is Chess Heroes coming to mobile?
A lot of people expressed interest in playing the game on a tablet, and I really want to make that happen! On the sunny side, I'm using Unity, and the game will be a snap to port. On the cloudy side, releasing a new title with little to no publisher support on a mobile platform is … dicey. At best. So, hopefully, by starting on PC platforms I can build an audience and some awareness of the project, and work towards an eventual mobile release. It's a business decision at the end of the day.

Will Chess Heroes be released on a console?
I have a background in console development, and I would absolutely love to put this on a console. Once again, Unity and a simple interface save the day, and once again it comes down to a business decision. I wish I could just smash a bottle on the wall, wail away on a guitar in a thunderstorm, and raise a middle finger to mature fiduciary practices, but a mortgage and kids really change the calculus on things, amirite? But seriously, it can happen, and hopefully will.

What?
It's just me, Ted Brown, working on the game. Corey Jackson is creating the music.

Posted by Unknown at 9:35 AM No comments:

Chess Heroes had its first public showing at SIX, the Seattle Independent Expo, on September 2. And the reception was incredible! It was almost unbelievable how positive people were when they saw and played the game. Nobody walked up, played it, and tried to sneak away, for example. Nobody gave half-hearted praise as they scooted away from the table. It was all good! In many cases, it was extremely enthusiastic! To say that this was a "tremendous boost" really doesn't do it justice, but I'm technically on vacation right now and capturing emotions with highly specific poetical nuance is not high on the list. =)

I want to give huge thanks to everyone who skipped a bit of the Penny Arcade Expo to see us at SIX, and to everyone who spent some time with Chess Heroes. Another huge round of applause goes to my wife, without whom it could not have gone as smoothly! 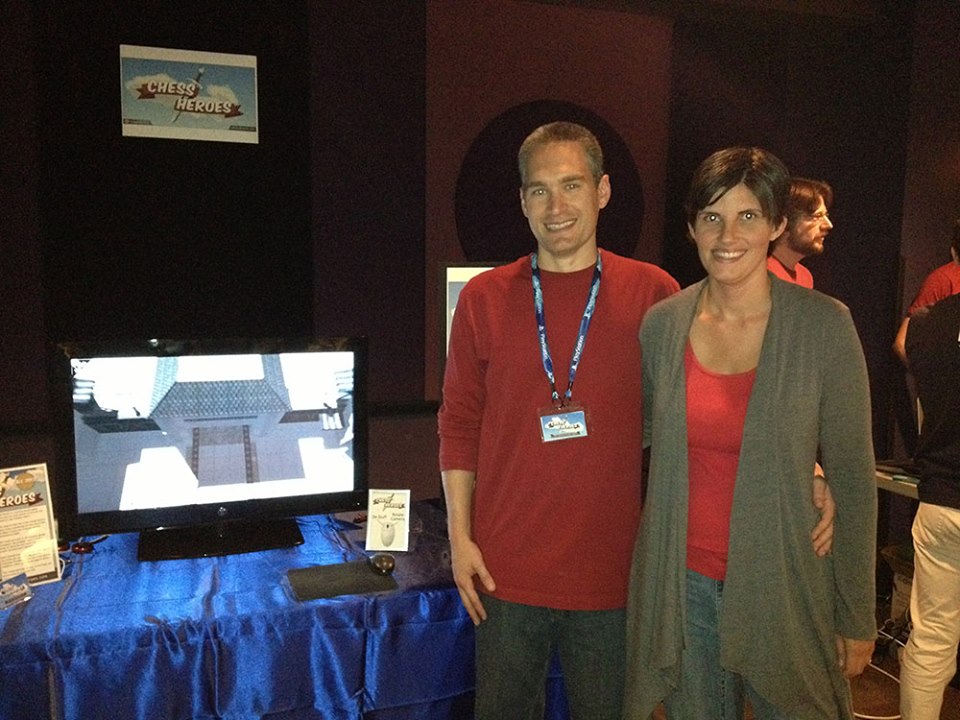 That's us. Now you know what we look like! (but when you read this, I hope I still sound like Morgan Freeman in your head, instead of one of those singing chipmunks) 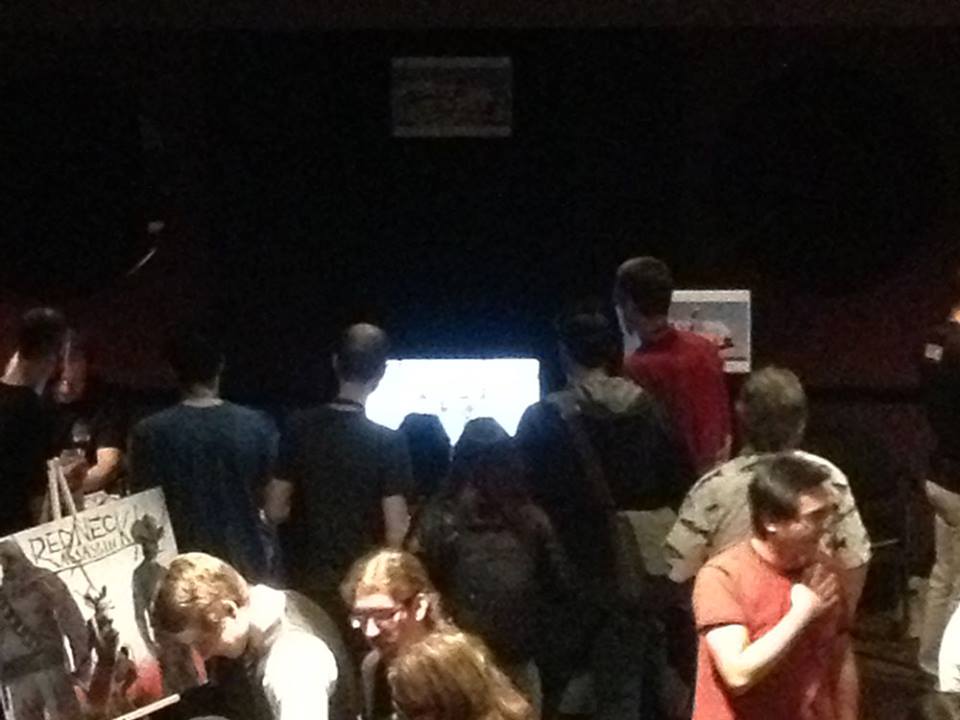 According to my wife, this was a typical crowd watching Chess Heroes on the big screen we had in the corner. Other times, the station looked like this: 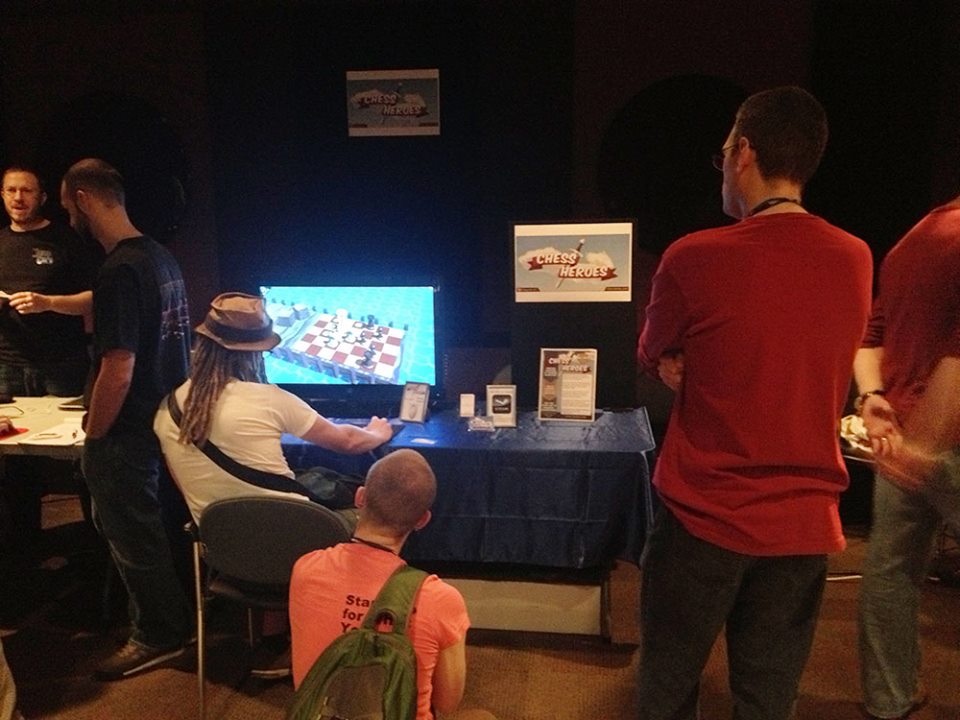 People sat down to try the game, and often played through several levels. Other people liked to sit back and watch the animation, comment on tactics, and sometimes heckle friends who made silly errors that let their King be toppled!

Without a doubt, this was a worthwhile trip. I know I'm supposed to be on vacation after working every day for a month, but I'm so stoked right now that I can't stop thinking about it! (which is why I'm sort of straddling the line with e-mails and blog posts, heh)

I'll post a FAQ later today, but to answer a common question: Chess Heroes will be out, in some form or another, by November of this year. It will be released in three waves, once for each act, and those who buy it early (and cheap!) will get the later releases for free.

Thanks again! And like us on Facebook if you want a chance at winning $20 on Steam on September 5th!