Wow! What a great week. I started knowing what I had to accomplish (adding character to the chess pieces via animation), but had no idea if (a) it would work and (b) how to actually do it. And then when I got (a) and (b) done, I had to worry about (c) getting it into the game!

I'm happy to report that the results are in, and measured by the "it feels good" meter, animating the chess pieces and tying that to a rigid body collision system really hits the mark.

The Pawn, for example, hops around from space to space, with a little squish and squash action on his base as he does so. And of course, he headbutts pieces he's trying to capture. Spunky little guy, isn't he? The rest of the pieces each have their own "personality" and set of animations. I can't wait to show you!

Two other great things happened this week: my good friend Corey gave me a CD of musical "sketches" of him trying to hone the dual themes of the game: the bright, clear sounds of the Light side, and the heavy, warm sounds of the Dark side. It sounds great so far. He is a gifted musician, and I'm incredibly honored he will be taking the time to help me out on this.

I also sat down with my friend Jim, a senior designer at Zynga, for the first ever playthrough! Jim gave me clear-headed, well-articulated design critiques and suggestions that are extremely valuable. But the key emotional takeaways for me were the words "I'm impressed" and "It feels good to capture pieces." Rock on! Especially since I'd only finished integrating the animation system that morning. :D

Jim also helped me figure out exactly what Chess Heroes is, in terms of genre classification. I was straddling the line between Tactics and Strategy, but it didn't really fit the definitions, and I wasn't comfortable with the "high concept" summary. But he helped me realize that, based on the scenarios I've designed, it's a "tactical puzzle" game. I've crafted each scenario with specific intentions in mind, and hopefully this will clear up any confusion from future players. 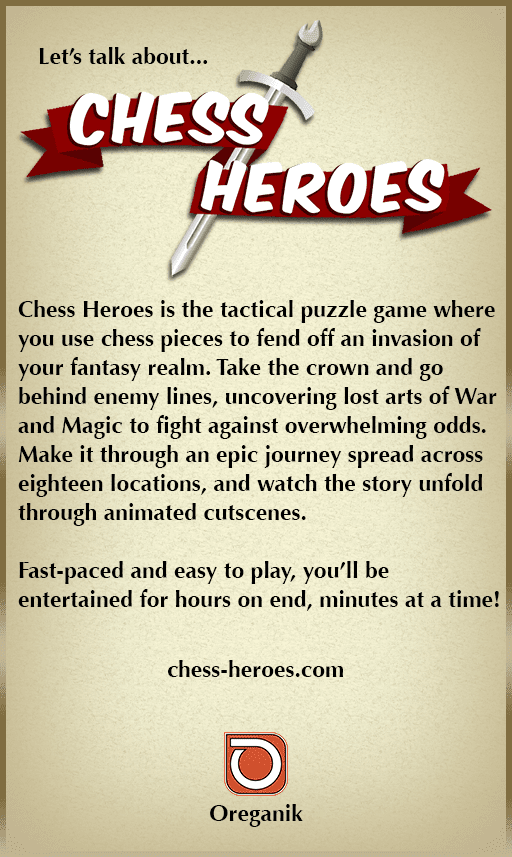 That's not to say I can't shift gears later, and offer a more strategic take in later builds or acts, such as a meta-design similar to the classic Heroes of Might and Magic. Time (and feedback!) will tell!

I had to rejigger the website for Oreganik (it was pretty... boring) and make one for Chess Heroes. There's also a Facebook page, so please Like it if you'd like to get the updates and occasional funny game-related news snippets.

I'm actually writing this on Saturday, as I've shifted to a 7-day workweek schedule until the Seattle Indies Expo (SIX) is over. I was stoked to discover it will be next door to PAX, so if you're there on Sunday, please drop by and say hello!

Here's the hit list for the week. I'm considering posting the remaining list online. If I get a SINGLE E-MAIL saying that would be good idea, I'll do it. :)